America’s Frontline Doctors released the following statement in response to inaccurate and slanderous reporting by both Time Magazine and NBC News.

When Covid-19 hit in March 2020, the formal recommendation from the United States government was to lock down and only come to the hospital if you could not breathe.

Never before in the history of our nation has this been medical advice. Over the past 18 months, the government has contended that there is nothing that can be done other than masking to protect individuals from Covid-19. The human cost of that reckless and unscientific prescription has been massive. This has been attested to by thousands of doctors worldwide including several testifying before Congress.

A small number of courageous physicians in the U.S. and around the world put their lives, their fortunes, and their sacred honor on the line, and started treating Covid patients early to prevent hospitalization, mechanical ventilation, and death…  Globally, it is well known that early treatment works, but this truth continues to be frantically suppressed by the dishonest American media and the medical establishment…

..Globally, it is well known that early treatment works, but this truth continues to be frantically suppressed by the dishonest American media…

Caution: This common sense plan has NO regard for Big Pharma profits nor political correctness; nor does it provide any cover for all the bad decisions and non-science based policies made by corrupt politicians, CDC, WHO, FDA and the NIH.  I guess that’s why it is so appealing 🙂

This is a very thorough report published by Peter Navarro on Feb. 2, 2021.

Christ’s faithful are at liberty to make known their needs, especially their spiritual needs, and their wishes to the Pastors of the Church. They have the right, indeed at times the duty, in keeping with their knowledge, competence and position, to manifest to the sacred Pastors their views on matters which concern the good of the Church.  They have the right also to make their views known to others of Christ’s faithful, but in doing so they must always respect the integrity of faith and morals, show due reverence to their Pastors, and take into account both the common good and dignity of individuals. —Code of Canon Law, 212

As mentioned in my Pope Francis post, I will always be Catholic.  However, as I seek the whole truth about the state of the Church, I realized I could not get the full picture from mainstream Catholic sources alone.  Mainstream Catholic media will tend to minimize any criticism of the Pope and the Bishops because, to be frank, their livelihood depends on not ruffling the feathers of their primary information sources.  So I incorporate additional “rogue” sources into my research.

Below is a summary of what I have come to believe about the American Bishops and the United States Conference of Catholic Bishops (USCCB), and why they are a bitter disappointment.

I will always be Catholic, however, that does not mean I turn a blind eye toward what is happening in the Church.  Mainstream Catholic media will tend to minimize any criticism of the Pope and the Bishops because, to be frank, their livelihood depends on not ruffling the feathers of their primary information sources.  But by also reading more “rogue” sources you can get a more complete picture of the state of the Church.

So let me explain why I believe Pope Francis has lost all moral credibility, even though he is the rightful head of the Catholic Church.

Below are General articles about the COVID-19 “vaccine” injections.  (See also posts on Effectiveness and Safety)

Effectiveness – See 25+ links to articles on the effectiveness of the COVID-19 “vaccine” injections.

Safety – see 30+ links to articles on the safety of the COVID-19 “vaccine” injections.

Summary: Why I am not getting the COVID-19 “Vaccine”

Below is a summary of what I have come to believe after my research on COVID-19.  See separate posts on vaccines, masks and for various experts. 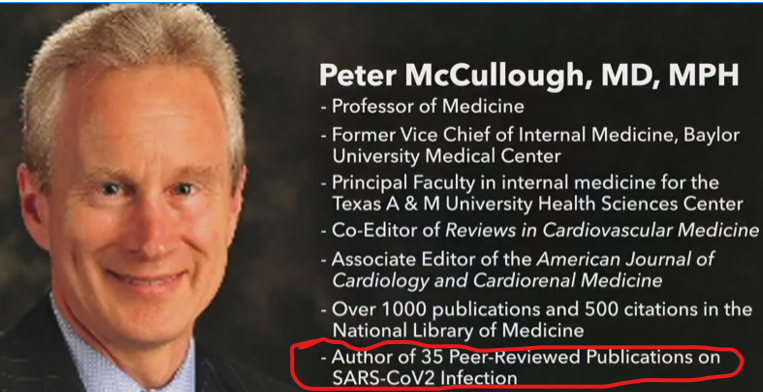 Articles and videos of interviews with Dr. Peter McCullough – see his preeminent qualifications.

Below are some articles from several different sources on the PCR test showing it is an inaccurate method for determining infections and is being discontinued:

Why should we distrust the major pharmaceutical companies and the USA health system in general?  Below are a few reasons that I have collected which suggest a skeptical attitude is in order.

First, the documentaries.  Please watch these documentaries, at least the 1st one!  I believe they are very persuasive, unless of course you are already hardened in your opinion about vaccines.

VAXXED: From Coverup to Catastrophe  https://www.youtube.com/watch?v=UovKXySxATU
Alternative sites: https://www.vudu.com/content/movies/details/Vaxxed-From-Cover-Up-to-Catastrophe/821170 or https://archive.org/details/Vaxxed_20170131
This is about the fraud and coverup within the CDC around one particular vaccine: MMR.
VAXXED II: The People’s Truth  https://www.youtube.com/watch?v=3UWNySwlDLg
Alternative site:  https://live.childrenshealthdefense.org/education/vaxxed2
This film evolved into a collection of interviews with parents and doctors about vaccines in general.  Since the CDC has refused to study the outcomes of the vaccinated vs. the unvaccinated, Polly Tommey and her team investigate this question themselves.  Polly and the team travel over 50,000 miles in the USA and around the world asking “Are vaccines really as safe and effective as we’ve been told?”
Next, various videos and articles that provide rationale for distrusting Big Pharma.